← back to
New Focus Recordings
Get fresh music recommendations delivered to your inbox every Friday. 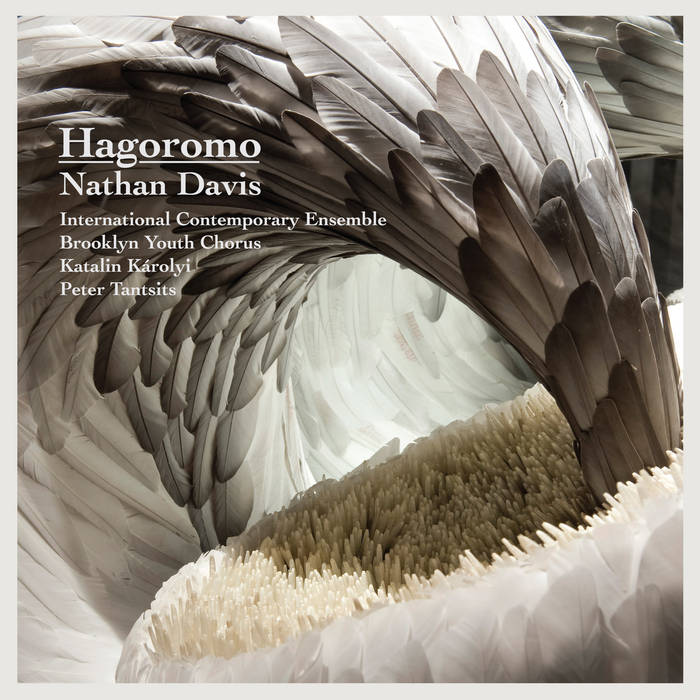 Nathan Davis’ Hagoromo is a setting of a tale that has its roots in many cultures. In some form or another, the swan maiden archetype can be found in Western and Asian folklore, specifically in Germanic sources, Japanese Noh theatre, and Scottish traditional stories. The core plot of the story is consistent — a man steals a magic garment from an angel, robbing her of her connection to her native, mystical realm. The symbolism in the skeletal plot is rich, engaging with issues surrounding transactional versus enlightened interaction, boundaries of relationships, and lines between the earthly and the spiritual. Davis’ dance opera, written for dancers Wendy Whelan, Jock Soto, vocal soloists Katalin Károlyi and Peter Tantsits, the International Contemporary Ensemble, the Brooklyn Youth Chorus, and a puppet troupe, was premiered and recorded over several performances on BAM’s Next Wave Festival in November 2015.

Davis writes, “The instrumentation of Hagoromo is an expansion of the traditional Noh forces: the melodic and percussive roles of flute and drums are projected into an quintet of flute, bassoon, violin, guitar, and percussion. A girls choir inverts the chanting of a Noh chorus of men. And the character roles are sung by an alto and tenor while being portrayed by two dancers. The musical language of this Hagoromo is not Noh or Japanese. It was however written with an awareness of fundamental Noh characteristics, looking to analogs of these aspects in my own musical language and background. Time is demarked by recurring percussive sounds - at various points these are wood cracks, or slow time cycles played on large gongs, or the slow heavy thud of a work song - that serve to articulate different pacings. Chanted music and text setting is influenced by Japanese metric settings, particularly the hiranori patterns typical of Noh, while tending toward open harmonies. And structural conventions of Noh are generally retained together with the story.”

Davis’ music depicts two realms, the heavenly and the earthly. The heavenly music, as exemplified in the ritualistic second movement, “Entrance of the Angel”, is harmonically suspended, pulsating over regular time intervals, and articulating a pitch language built on the overtone series of the open strings of the violin. The earthly music, as heard in the haunting seventh movement, “The Storm”, or the intertwined lines of the eleventh movement, “An Angel Fading”, is characterized by pitch material generated from alternating major and minor scales and is organized into directional harmonic progressions. This audio recording, edited from those performances, chronicles the piece’s premiere run while also allowing the listener to focus on Davis’ intricate composition independent of the multi-disciplinary production. The work impressively balances myriad musical forces: an expanded palette of percussion and extended instrumental techniques, use of live electronics, and integration of the youth chorus into the dramatic fabric of the piece. The beguiling result captured here on this audio recording honors and preserves the mysterious and universal beauty of this timeless tale within the context of a multi-dimensional contemporary concert work.